This carving is located near the top of the rails to the left as one is ascending the mountain, underneath one of the rock formations.

Alice Campbell, age 21, is listed in the household of her father, William P. Campbell in Stone Mountain on the 1910 census. In the same household is her older brother, Fulton E. Campbell, who’s listed as a laborer and the industry as granite cutter, so it’s likely he worked in the quarry at Stone Mountain and did the carving. Other records at Ancestry list Alice’s date of birth as 9 April 1890. On 5 January 1913, Alice married Andrew Nash in Fulton County.

Alice and Fulton’s parents were William Parks and Amanda Jane (Cash) Campbell, who were married in DeKalb County, GA on 26 October 1876, and both of whom are buried at Rehoboth Cemetery in Tucker. William Parks Campbell was listed as a butcher or the owner of a meat market on the census from 1900 to 1920. In 1930, he’s listed as a farmer, and his industry is listed as truck farm.

Fulton Earnest Campbell can be found in his father’s household on the 1880, and 1900 through 1930 census and in 1910 and 1930 he’s listed as a stone cutter or granite cutter. In 1920, he appears to be working for his father, as his profession is salesman in a meat market. His World War I draft card lists his date of birth as 17 October 1877, and provides the description that he has brown eyes and black hair, and is tall and stout. He lists his profession as a butcher. The Georgia Death Index lists his date of death as 7 December 1958. 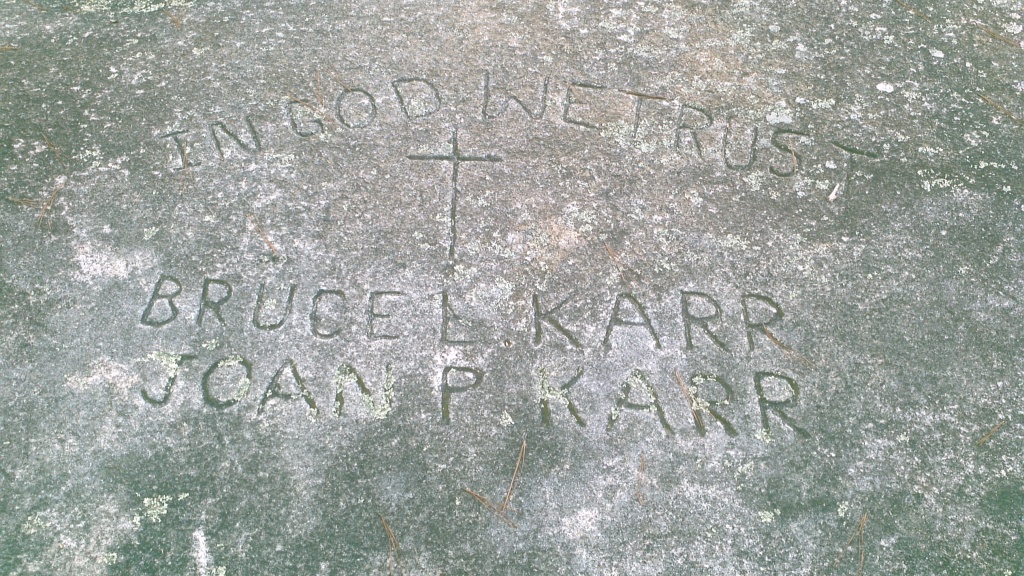 These are relatively recent carvings. I didn’t note the exact location of them other than they’re along the walk-up trail. My memory is that the carving for the couple is near where the Cherokee Trail intersects the walk-up trail, in an area without much tree cover.

Bruce Lynnwood Karr was born 30 June 1939 in Ann Arbor, Michigan, and died 27 January 2015 in Blairsville, GA. There is a public record at Ancestry showing him with a Stone Mountain address in 1993, and his obituary at Find a Grave lists that he served in the Navy. In 1940, he’s found on the census in the home of his grandfather, John Husband with his parents Harold M. Karr and Ada Karr. The carvings are undated, but given the year of his birth, they were probably done in the 1980s or 1990s. Since he’s contemporary and has a rather extensive obituary posted at Find a Grave, I’ll direct people to that, rather than reprint it here. I could not find information on Jean P. Karr, and this is not his widow’s name in the obituary.

2 thoughts on “The Carvings on Stone Mountain, #6”